As a dramaturg, Arly works as a liaison between the art, the artists, and the audience. She shares research in creative formats, develops immersive educational experiences for audiences, casts, and creative teams, and designs multimedia resources, helping artists to map out the world of their play and audiences to join them meaningfully in that world. 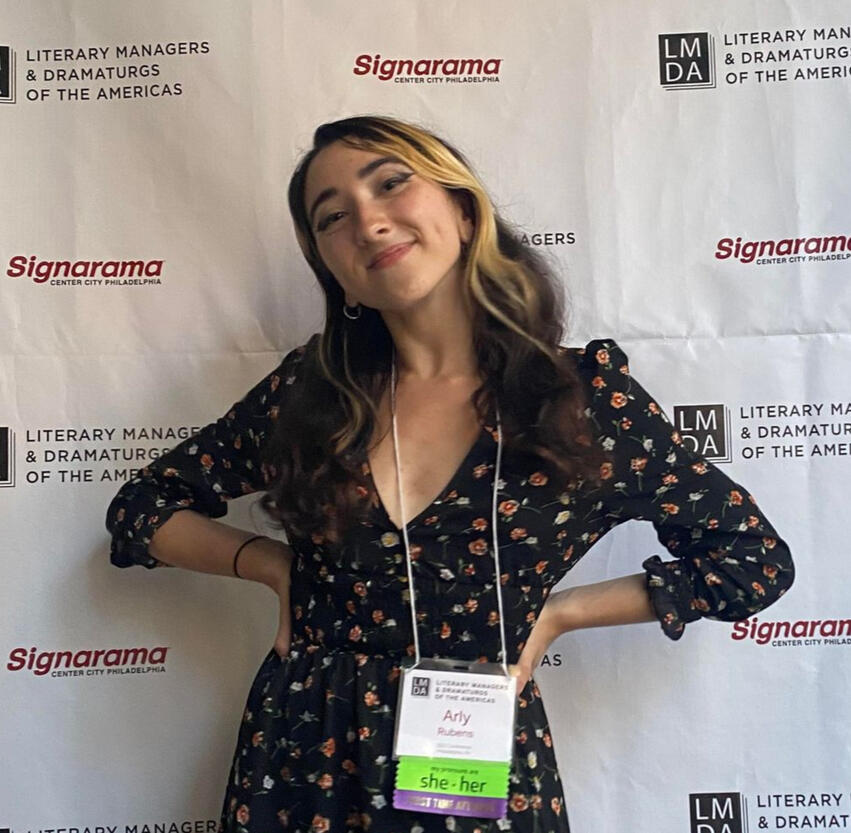 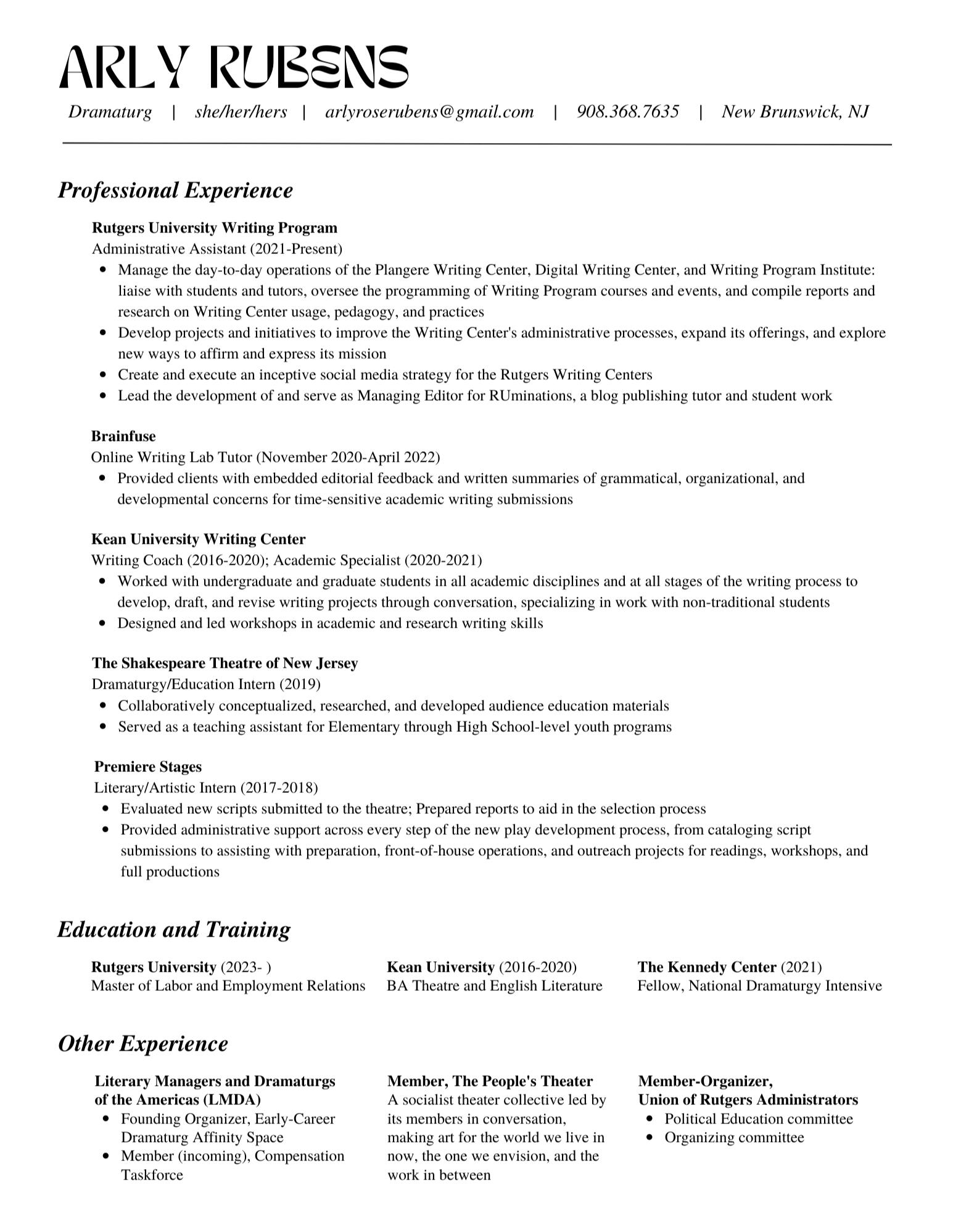 Indecent's lobby was filled with Yiddish popular music and performance recordings, playing over speakers and on screens. For the full experience, press play below! If asked to explain Indecent, you might say first that it’s a true story. You might go on to describe it by what’s true about it: it’s about a play that really was, events that really happened, people who really lived. But that’s not all there is to it. To tell a true story is not just to relay fact, but to play through the ways in which we, as people, interact with that history.The actors at the center of Indecent risked their livelihoods to tell a story because a story is not just a story. For the character Deine, who is performing in The God of Vengeance alongside her girlfriend, a story is a first chance – perhaps the only one she will ever get – to kiss the woman she loves onstage. For Lemml, our narrator, the same story becomes many things over time: it is a gateway to new ideas, new loves, and new possibilities for life, then something steady to hold onto in a strange new place, then a lifeline as essential to survival as food.The core Yiddish theater audience that would have filled the seats for The God of Vengeance, from stages in Germany and Poland to New York City, diverse crowds ranging from working-class immigrants to rabbis and intellectuals, felt deeply that a story is not just a story, too. In America especially, these audiences found in the Yiddish theater a playing ground where they could work through being American, being Jewish-American, and being human. Some early Yiddish playwrights wrote with the intent to teach their mostly uneducated shtetl audiences, introducing them to new ideas and challenging them to think more deeply about their lives and the world around them. But, in many ways, these audiences learned from the theater on their own because they saw the theater as their own: they were participants in the action, calling out to the actors, booing and cheering, crying loudly from their seats. There is an anecdote about a man who, in the middle of a performance of a Yiddish adaptation of King Lear, leapt up from his seat and ran down the aisle, screaming “To hell with your stingy daughter, Yankl! She has a stone, not a heart. Spit on her, Yankl, and come home with me. My wife will feed you! Come Yankl, may she choke, that rotten daughter of yours.” This is a man for whom there isn’t a wall between theater and real life, specifically his own real life. This is how a story becomes more than a story.Indecent takes us through the truth in a swirl of real people, and imagined people, and what we might imagine some real people were like, and what The God of Vengeance may have meant for many people we’ll never know the names of through the mouths of characters we do. We perform this play about a true story to remember that history together, or to teach people that it happened. But one story, even a true one, is many things: a love letter, a mourning, a celebration, a remembrance. Anna in the Tropics 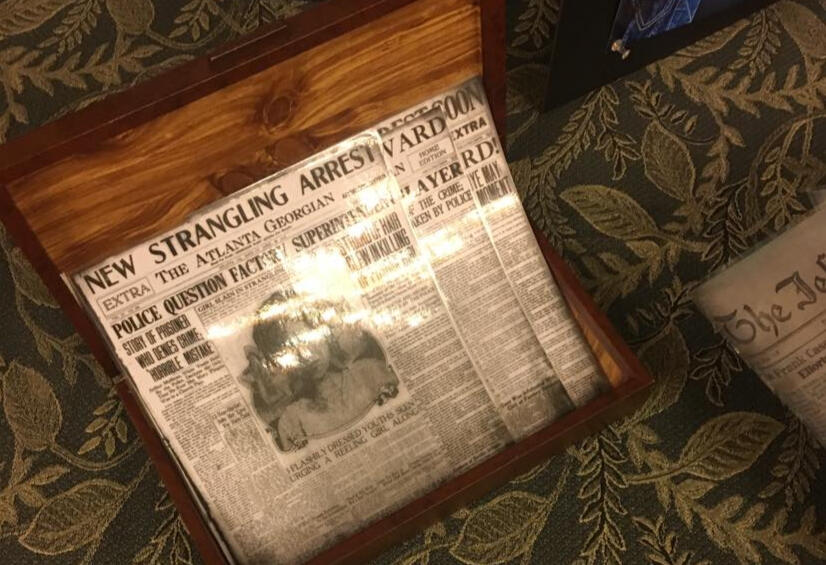 “Today, even in the heart of the workshops, and during the hours most suited to manual labor, imaginations are busily questioning scientific and philosophical truths…. They are talking and discussing; they are reading the works of good modern authors and consulting with each other… in short, they are doing what they can to learn and to continue along the path of civilization.”
- La Aurora, 1866In the factories of Cuba and Ybor City, in a flash of time, there was the lector. Typically a former cigar roller himself, selected for a strong voice and an actor’s imagination, the lector delivered readings from pro-labor news to poetry from a platform above the factory floor to the workerlisteners, the oidores. He was both a defining presence of the cigar factory and an employee of the workers themselves, who pooled their money to pay his wage and chose his reading material by a vote. Lectors filled a complex role as both a mouthpiece, their readings largely determined by the preferences and political leanings of the cigar rollers, and a source of information and education, enabling laborers who could not read or write to quote great poets and debate Don Quixote.Anna in the Tropics tracks the relationship of workers both to their lector and his story, Tolstoy’s Anna Karenina, which in turn becomes their own. Many of the play’s characters are open to both losing and finding themselves in fiction, concluding before long that “what is happening in the novel has been happening to us.” From Ybor City, Florida, to nineteenth century Russia, even social and economic concerns are mirrored: Tolstoy’s characters muse on the rise of industrialization as Cruz’s cigar rollers fend off the threat of replacement by machines. Perhaps more significantly, the oidores see themselves and each other in the people at the heart of the story, finding empowerment in Anna or a parallel to their own complex relationships in the lessthan-romantic portrayal of her marriage. The characters of Nilo Cruz’s Anna find in Tolstoy’s Anna both a sense of connection and an escape, ideas about the nature of love and daydreams of Russia.In 1931, threatened by the power of lectors to inform and empower the working population, factory managers and local authorities dissolved the role. Readers returned to the factory floor, and a vibrant exchange of language was replaced in many factories by a single radio. If only for a cultural moment, the lector channeled the ability of ideas to reach across space, language, and culture, and to enable their readers and their listeners to understand each other, and themselves, in literature. 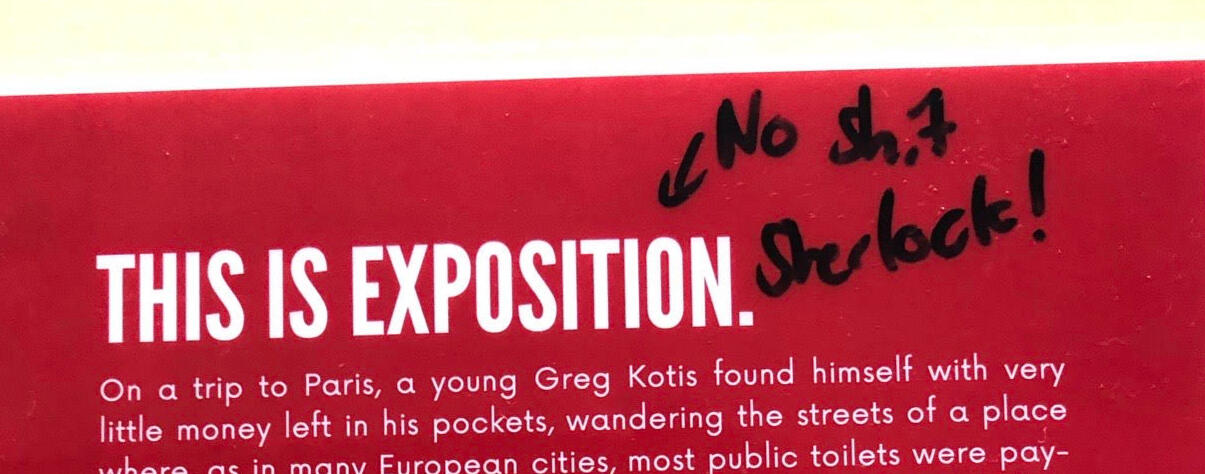 A Jewish man from New York moves to Georgia to assume the role of Superintendent at the National Pencil Factory. He takes a thoroughly Southern Jewish wife, Lucille Selig, and oversees a staff comprised partially of children and young teenagers, a legal workforce at the time. Then, thirteen-year-old Mary Phagan is found dead in the basement. A series of legal proceedings follow, marked by biased news coverage, easily deconstructed witness testimonies, and misconstrued circumstantial evidence. The results of the case reverberate through the American South for years to come, jumpstart the resurgence of the KKK, and decimate the steps taken toward acceptance by Southern Jewish communities.The more you consider today’s political landscape, the closer you are to understanding the climate that enabled the Leo Frank case to progress as it did. Feelings of resentment among white, working-class Southerners – including anger toward their worsening economic circumstances, the Northern “carpetbaggers” they perceived to be taking advantage of them, and urban politicians they believed to be uncaring and disconnected to their way of life – contributed to the outcome of the Leo Frank case as much as they contribute to contemporary politics. When a group feels helpless, they can be expected to lash out, and in a sense, Parade examines that helplessness: that of one man positioned against a news cycle and a people actively spreading and accepting false information, of his wife’s assumed inability to help, and even of the people of Marietta as they rally against a perceived enemy in the North. This sense of helplessness, real or manufactured, was perfectly conducive to the victimization of a man like Leo Frank: in the eyes of many Southerners, he stood as a representation of the wealthy, opportunistic Northerner, a stereotype of a man who did not understand or respect their way of life. Beneath attempts to hang Leo Frank, there was an attempt to rally against the enemy in the “other.”Anger about the murder of Mary Phagan did not drive the tragic ending of this case so much as the way this anger was channeled and weaponized. The Frank case was plagued by the same fear-based rallying against a determined enemy that rises periodically through American history, from the Salem Witch Trials to the Red Scare of the 1950s. Reporting on the Frank case was fueled by a dangerous marriage of the sociopolitical and racial dynamics of the South with unethical practices at the hands of lawyers, reporters, and community leaders. Combined, these acted as a platform for sensationalism and false information, which rode the wave of very natural, very human reactions – anger, confusion, fear of change – toward dangerous action.